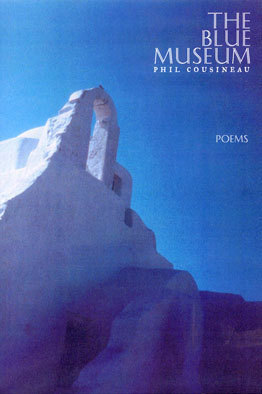 From the San Francisco Chronicle:

"For years, Lawrence Ferlinghetti has been asking, 'Where are San Francisco's great new poets?' The answer is, they are here, and in fact have been here in San Francisco and the Bay Area for a long while....

Phil Cousineau has long been a powerful presence in the Bay Area literary scene, but he is best known as a filmmaker and...writer who has carried on and reinterpreted the work of Joseph Campbell, especially regarding the omnipresent influence of myth in modern life.

Last year he also had a bestseller with "The Way Things Are," a collaboration with the religious philosopher Huston Smith. All this while Cousineau has been publishing--in very limited editions--collections of his own poetry, whose influence has been noted by a great many other major poets of his generation, including Antler and Jane Hirshfield.

But his latest collection, The Blue Museum, comprising poems selected from his entire life's work, is a book readers will be unlikely to forget.... [It] contains the whole story of one man's life, the way poets seldom do it any more--the way Wordsworth or Whitman did it, say, or William Carlos Williams, or even, more recently, Charles Olson. Cousineau writes in long, conversational, deceptively casual lines that quickly add up to an explosive critical mass.

At times these epiphanies are dazzling, as when Cousineau recalls in "Go-Kart" the first time in childhood he took note of his own being in the world:

My nostrils fill with the smell of freshly mowed grass,
my eyes smart with streaming sunlight, my fingertips warm
to the touch of just-sawed two-by-fours
my thin arms sag under the weight of tools
hauled in from my dad's hand-made,
silver-painted workbench.
All at once --
in one swift moment --
I know I know
I know I'm knowing I'm alive
and not not alive, not dead,
not like my recently deceased grandfather,
not unborn like our neighbor's nine stillborn babies.

[He] is equally adept at the sort of short-lined, concise, clear- eyed appreciations of nature perfected by Gary Snyder...exquisite lyric about the harmony between man, woman and unborn child....

The Blue Museum contains poetic tributes to a whole array of artists and heroes who have inspired Cousineau in the literal odyssey of his life, as he has wandered across the globe for decades. There are poems about John Lennon, Anne Frank, Ray Charles, Anna Akhmatova, the bargirls of Naples and the most beautiful ode to Van Gogh I have ever read, "Vincent's Search"..."

CLICK HERE to find Phil Cousineau's poems "Memoricide" and "The Music in the Wood" from THE BLUE MUSEUM (published by Sisyphus Press © 2004) on The Scream Online.

"Phil Cousineau's magnificent 'museum without walls' is an epic tribute to the Homeric, the Aristotelian, the Dantean, but, most importantly, to his realization that all poetry comes from the beating human heart. This 'scribacious' epic traverses the time of his life--of our history, of our literature, and of a living mythology he fuses for us all." --Brenda Knight, author of Women of the Beat Generation