The Hero's Journey was first published in 1990, by Harper & Row. 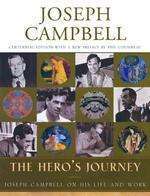 The Centennial Edition of The Hero's Journey, with a new preface by Phil Cousineau, was published by New World Library in 2003.

THE HERO'S JOURNEY: Joseph Campbell on His Life and Work

"For Campbell fans, THE HERO'S JOURNEY will provide hours of amusement and edification. For those who have heard of Campbell and wonder what all the fuss is about, there's no better introduction to the man and his ideas."
--San Francisco Chronicle

The man behind the myth is lovingly revealed in this collection of interviews with the late Joseph Campbell. Using Campbell's format for the "hero's journey," Phil Cousineau organized these interviews so that they reflect Campbell's own chronological life quest. He begins with "The Call to Adventure," in which Campbell speaks to his fascination with Native American myth as a child, and moves through "The Road of Trials" (his years in college and as a young professor at Sarah Lawrence) and the "Meeting with the Goddess" (referring to meeting his wife of 50 years, the modern dancer Jean Erdman). Since most of the book is written in a question and answer format (with a few excerpts from lectures), much of the text is in Campbell's own words.

Also included in this important work are interviews with some of the many artists Campbell inspired, including poet Robert Bly, Native American author Jamake Highwater, anthropologist Angeles Arrien, Doors' drummer John Densmore, and psychiatric pioneer Stanislav Grof. Cousineau was screenwriter for the documentary film of the same name, and worked with Campbell over the course of many years.

Read Michael Guillen on Phil Cousineau, Joseph Campbell and The Hero's Journey in his blog, "The Evening Class" 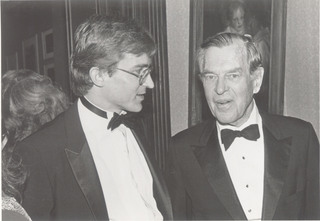 Phil Cousineau and Joseph Campbell at the National Arts Club in New York in 1985. Campbell had just recieved the Medal of Honor for Literature.